Taste more chili than ever before, wash it down with some cold Deep River Brewing Beer and rock out to the live music of local youth bands, not to mention the winner of this year’s Clayton Idol. 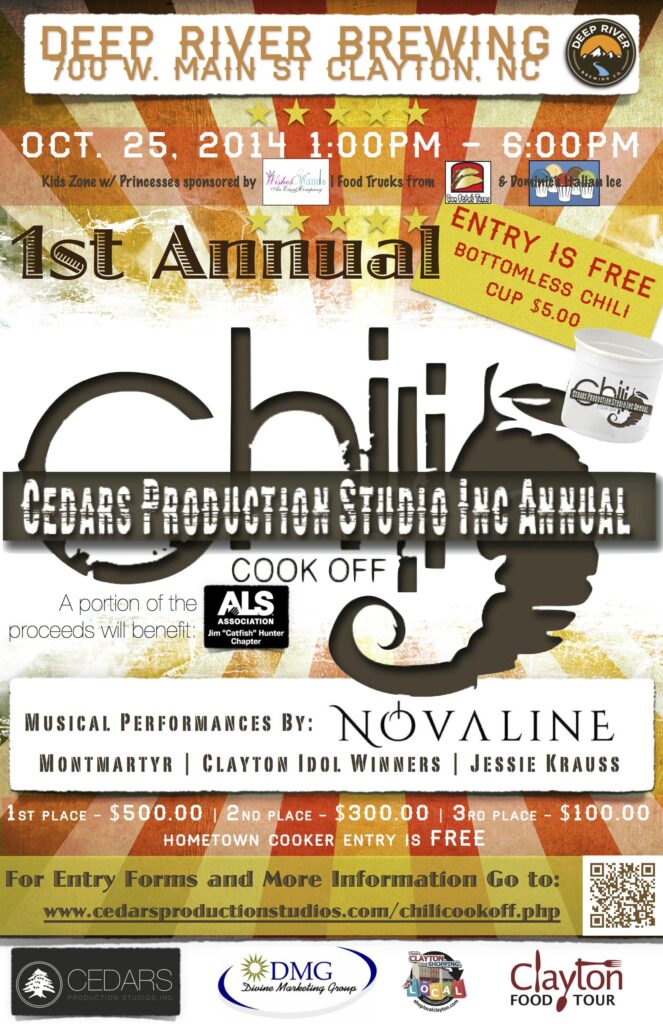 Take in the local vendors, hang out with your kids in the HUGE Inflatables Kids Zone and enjoy a fun-filled time at the 1st Annual Cedars Production Studios Chili Cook-Off & Frisbee Golf Tournament.

Come early if chili is your draw – when the chili is gone, it’s gone, but the band rocks on with vendors and a HUGE Kids Zone to keep everyone entertained up until dark.

If you’re coming for the chili, don’t just taste it – pick your favorite and vote it into the running for the “People’s Choice” award. Cookers covet the People’s Choice award just as much as the Judges’ Choice so your vote could be an important tiebreaker!

As for the official contest, judges will scrutinize every chili in a blind tasting and make their selections based on taste, texture and seasonings. It is a hard-fought competition with First prize in the Home Town Cooker category taking home $500, $300 for second prize and $100 for third. Custom plaques are also presented to the winners for Home Town Cooker, People’s Choice and the Best Restaurant Chili!

And Cookers, if your chili doesn’t impress the judges, maybe your spirit will! The Spirit Award goes to the cooking team with the most creative booth, highest energy and best personality so SPICE IT UP to win that prize!

Entering the competition is FREE for Hometown Cookers. We realize you have to make a lot of chili to allow the crowd a taste of your secret recipe so you need to spend your money on the special ingredients that make your chili great.

Event Admission is FREE but a donation is greatly appreciated. Your donation includes entertainment and our Kids Zone. Unfortunately free/donation admission does not include chili tastings but a 5$ tasting bowl includes all of the chili tasting you can handle until its gone! Don’t like Chili? No worries, there will be hamburger’s and hotdogs for those that need a change!

The band won’t stop playing till the last prize is awarded and the last child has jumped off the inflatable slide. So come early, stay late and support your Community!!!